Janusz Korczak and Anne Frank - last words in their diaries 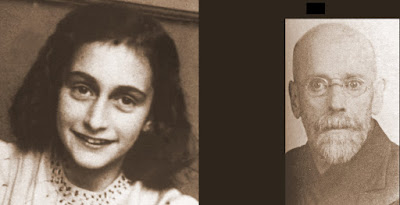 I have watered the flowers, the poor orphanage pants, the pants of the Jewish orphanage. The parched soil breathed with relief.
A guard watched me as I worked. Does that peaceful work of mine at six o’clock in the morning annoy him or move him?
He stands looking on, his legs wide apart.
. . .
A cloudy morning. Five thirty.
Seemingly an ordinary beginning of a day. I say to Hanna: “Good morning!”
In response, a look of surprise.
I plead: “Smile.”
They are ill, pale, lung-sick smiles.

You drank, and plenty, gentleman officers, you relished your drinking – here’s to the blood you’ve shed – and, dancing, you jingled your medals to cheer the infamy to which you were too blind to see.
. . .
Our father who is in heaven…
This prayer was carved out of hunger and misery.
Our daily bread.
Bread.
…
I am watering the flowers. My bald head in the window. What s splendid target.
He has a rifle. Why is he standing and looking on calmly?
He has no orders to shoot.
And, perhaps, he was a village teacher in civilian life, or a notary, a street sweeper in Leipzig, a waiter in Cologne?
Perhaps he doesn’t even know that things are – as they are?

He may have arrived only yesterday, from far away….

Two year later, on 4th August 1944 the Frank family, along with the other four people hiding in the annex on Prinsengracht in Amsterdam, were arrested following an anonymous tip given to police.

Anne’s last entry was written on Tuesday, 1st of August 1944. It reads:

The former means not accepting other people's opinions, always knowing best, having the last word; in short, all those unpleasant traits for which I'm known. The latter, for which I'm not known, is my own secret.

As I've told you many times, I'm split in two. One side contains my exuberant cheerfulness, my flippancy, my joy in life and, above all, my ability to appreciate the lighter side of things. By that I mean not finding anything wrong with flirtations, a kiss, an embrace, an off-colour joke. This side of me is usually lying in wait to ambush the other one, which is much purer, deeper and finer. No one knows Anne's better side, and that's why most people can't stand me.

Oh, I can be an amusing clown for an afternoon, but after that everyone's had enough of me to last a month. Actually, I'm what a romantic movie is to a profound thinker – a mere diversion, a comic interlude, something that is soon forgotten: not bad, but not particularly good either.

I hate having to tell you this, but why shouldn't I admit it when I know it's true? My lighter, more superficial side will always steal a march on the deeper side and therefore always win. You can't imagine how often I've tried to push away this Anne, which is only half of what is known as Anne-to beat her down, hide her. But it doesn't work, and I know why.

I'm afraid that people who know me as I usually am will discover I have another side, a better and finer side. I'm afraid they'll mock me, think I'm ridiculous and sentimental and not take me...
Posted by Jim bao Today at 4:22 AM