Recent forgery in the Warsaw Ghetto

As I wrote earlier in the Warsaw Ghetto there were no yellow stars of David. 265 000 Jews from the Warsaw ghetto that were deported and murdered in Treblinka had white armband with a blue star. 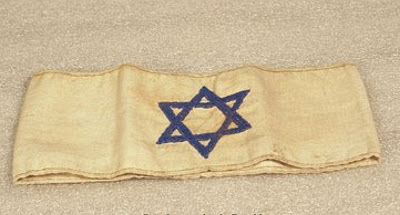 Also in Kraków ghetto the stars were of the same type as in Warszawa!

Forgery! Many Polish peoples and also many others will soon believe that Warsaw Ghetto Jews wore yellow stars! 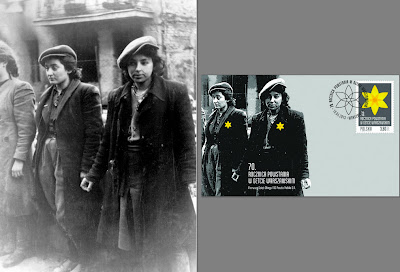 The photo above on the left is taken in the Warsaw ghetto during the uprising in April 1943. It comes from German Stroop Report and has an original caption: "Hehalutz women captured with weapons." Three Jewish resistance women, among them Malka Zdrojewicz (right), who survived Majdanek extermination camp.

The photo above on the right is the occasional letter from Poland - 70 years after Ghetto Uprise. On the Jewish resistance women breast the yellow Star of David is attached. Why star? Why yellow?  In the Warsaw ghetto, Jews were forced to carry an armband with a blue Star of David on white background.
These women considered Star of David as a symbol of Holocaust and Doom! Their participation in the uprising was kind of a rebellion against this humiliation.

I do not know who decided to put the yellow stars on ghetto fighters, 70 years after they were captured by Germans. Who earned on this forgery story? 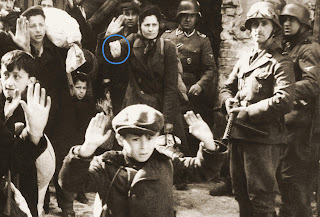 Warsaw Ghetto Uprise, April 1943. Captured civilians. On the picture there is one women wearing white armband with a blue Star of David (blue circle).