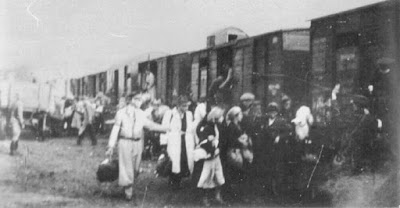 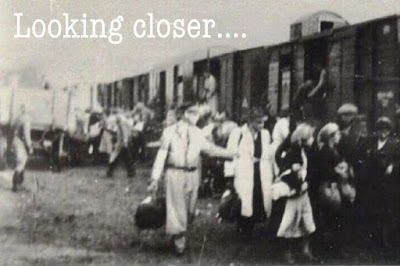 Thinking about Korczak and "Pani Stefa", teachers and 239 children I often do visit Umschlagplatz in Warsaw looking closer at the old photographs.

At Umschlagplatz, the Jewish policemen and German guards were responsible for loading the Jews into cattle wagons.

Here, at the picture above, there are several Jewish policemen wearing insignia caps of office, special armbands and dressed in the white or light coats. It is likely that there is one policemen in light coat at the opening of each wagon helping people to climb into the box cars.
On the left side there is a German guard and wagon (probably pulled by horses) that was used for transporting of the sick persons or persons taken to the Umschlagplatz directly after the round-up actions on the streets of ghetto.
.
In the middle of the picture there are two prominent persons heading to the right. One, probably a doctor in a hat and some nurses around him. Nurses are wearing an apron and the cap or white scarf on his head. On the left side of the doctor there is a Jewish policemen carrying a physician's bag. Germans were letting this type of rescues to go on letting at the same time thousands to be loaded to the wagons heading directly to Treblinkas gas chambers.
The doctors could claim that someone was too ill to make the journey to the east and could take single persons into the “First Aid hospital at Umschlagplatz” and thereafter taking them out of the deportation area!
Posted by Jim bao Today at 8:36 AM 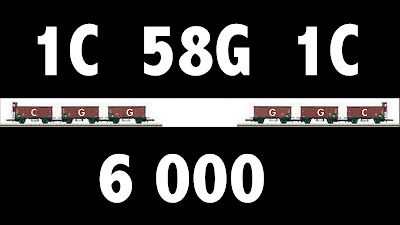 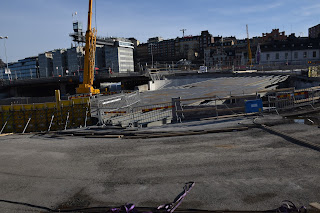