Henryk Rozencwajg-Ross (1910-1991) was a Jewish photographer employed by the Statistics Department of the Judenrat (Jewish Council) in the Łódź Ghetto. His job enabled him to document Jewish life in the ghetto, which he did, with thousands of prints and negatives.
During the liquidation of the Lodz Ghetto in August 1944, Ross and his wife Stefania buried a box of negatives in the field next to his house on 12 Jagielonska Street in the ghetto. The negatives were shot by Ross during the years 1940-1944.

Ross survived the Holocaust and returned to Łódź  where he located and dug up the documentary material he had buried underground before the liquidation of the ghetto.


Mendel Grossman was another Jewish photographer in the Łódź (Litzmannstadt) ghetto, born in 1913. He was a slim man of less than average height with sloping shoulders, his coat hanging on him as if it were not cut to his size, even his shoes appearing too large for him.


Grossman distributed many of his photographs; those he was unable to distribute, he tried to hide. In August 1944, shortly before the final liquidation of the Litzmannstadt Ghetto, he hid ca. 10.000 negatives, showing scenes from the Ghetto. He was deported to a labor camp in Koenigs Wusterhausen and stayed there until 16 April 1945. Ill and exhausted, he was shot by Nazis during a forced death march, still holding on to his camera

Many other pictures, (some of them by Ross and Grossman) were hidden by Nachman Zonabend (Natek). Nachman Zonabend was an inmate of the Łódź Ghetto from 1940 to 1945. In August 1944, following the liquidation of the ghetto, the Germans assigned him to a work unit whose task was to clean up the deserted ghetto. He succeeded in hiding parts of the ghetto archives, as well as photographs and art works of ghetto photographers and artists. He recovered these materials after the liberation of Łódź in January 1945. In 1947, Nachman Zonabend donated the bulk of his collection to the YIVO Archives. These are fragmentary records of the Eldest of the Jews of the Łódź Ghetto, by which name the Jewish ghetto administration was known.


Nachman Zonabend: I was among the group of inmates whom the Germans had left in the ghetto after the last deportation in August, 1944. We were to pack and ship the goods and equipment left behind by those Jews who had been deported. One day, during a moment when the Nazi guards were not paying attention, I slipped unnoticed into the deserted print shop of the ghetto administration and came out with a complete set of Rumkowski’s announcements. Next, I went into the offices of the Secretariat, at 1 Dworska Street, which handled Rumkowski’s correspondence. The papers that I found there, which had once been so meticulously sorted and filed, were in complete disarray. I stuffed them in large glass jars and later buried the jars in a remote spot. I also had another hiding place where I kept photographs, drawings and paintings made by ghetto artists.
One rainy Sunday in October, 1944, as we were marching under escort to the bath, we passed the former post office building, 4 Kościelny Square. I broke away from the group and ran inside. As a former employee of the ghetto post office, I knew the place well. Making my way through the silent corridors and empty rooms, I reached the back door and entered the adjoining house where the ghetto archives were located. Several suitcases bulging with documents stood on the floor covered with scattered papers. Evidently these materials were of special value and were meant to be taken to a safe place.
Not one minute could be wasted. I dragged the heavy valises down the stairs and into a deserted courtyard. In the middle of the courtyard I saw a well which turned out to be completely dry. With great difficulty, I brought the valises over to the well and dropped them in. The ground was strewn with quilt covers and pillows; their former owners were probably either dying in slave labor camps or had already been immolated in the crematoria at Auschwitz (Oświęcim). I gathered the covers and pillows and stuffed them inside the well, hoping that this would keep the documents dry and protect from harm.

In January, 1945, after the liberation of Lódz by the Red Army, I went back to Kościelny Square. Plunderers were already at work in the former ghetto, looking for treasures abandoned by the Jews. Despite the threat they posed, I pulled the suitcases out of the well and carried them to my apartment. Later on, I dug up the glass jars. I was relieved when everything was finally secure. An important record of the history of the Lódz ghetto had been saved.
On many occasions I have been asked to explain why I took all these risks to secure these documents, whose contents I did not even know, in a place as desolate as the ghetto was then, and at a time when the rest of us inmates were looking for places to hide themselves rather than a batch of seemingly worthless papers. Furthermore, what motivated me in the first moments of freedom to return to the abandoned streets of the former ghetto, now overrun with dangerous looters, in order to bring these moldy papers to safety?
From my first days in the ghetto I was close to a small circle of people who strove to document for posterity all that was happening around us. As the ghetto mailman, whose special task it was to deliver relief payments to welfare recipients, I used to come to the homes of poverty-stricken families. I will never be able to describe the destitution, starvation, sickness, despair, injustice and loneliness which I saw there. Fortunately, there were others who have done it, such as the photographers Mendel Grossman and Henryk Rozencwajg-Ross, who preserved images of the ghetto on film. I was a close friend of both men and was intimately familiar with their work as well as that of their colleagues, Rubiczek and Borkowski. I knew about the daily chronicle which was being meticulously compiled by scholars working in the Department of Statistics. I was involved with artists, writers and poets whose common goals was to preserve the evidence of the horrendous crime we were all witnessing, and I often participated in their discussions and meetings. Shortly before the liquidation of the ghetto I was able to hide some of their photographs and art works. I also made a mental note of the location of other materials to which I had no access at the time. 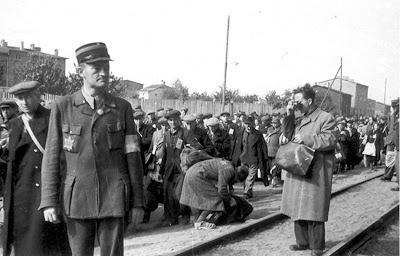 At Sienna street (looking from the Marszalkowska) there were two different walls - one raw and one plastered. Appearance depends on the dating of images or changes in ghetto boundaries. Ghetto boundary in this area (as also in the others) was changed. The first wall that was plastered, was the height of the courtyards between the Zielna street and Wielka street (until March 1941). After the change of the borders of the ghetto, the wall was raised in the middle of the Wielka street. From the pictures we know that it was raw, not plastered.