Director Korczak and Mr. X. in the Warsaw Ghetto prior the Rosh Hashana and Yom Kippur 1941. 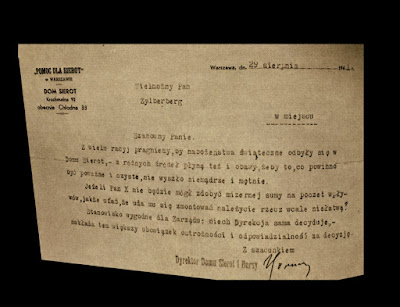 Who was Mr. X. in the Warsaw Ghetto ?

Was Mr. X. the member of ZSS ** or Centos (the Central Organization for Orphan Care) or The Jewish Council (Judenrat) or ZTOS (Zydowskie Towarzystwo Opieki Spolecznej, Jewish Mutual Aid Society sponsored by JOINT)?
It is likely that "Mr.X" was a powerful person in the Warsaw Ghetto and that Korczak disliked him.

For many reasons, we would like services to be held here on the High Holydays (1). Various people have suggested that what should be solemn might turn out quite differently.

If Mr. X. cannot raise a small sum for the Orphanage, how can we trust him to organize the more important details?

The attitude of the staff is clear - the director (2) himself must decide. This imposes a great responsibility on me; I must do the job meticulously. The final decision is mine.


Yours sincerely
Korczak
Director
.
(1) High Holydays - Jewish New Year and Yom Kippur (the Day of Atonement).
(2) Director, here Korczak himself
(*) there is no address on the letter just two Polish words "w miejscu" (at the spot) as the Orphanage and Mr. Zylberberg were housed in the same building at 33 Chlodna street.
(**) It is possible that Mr. X was working for the ZSS. In Yad Vashem Archives and Oneg Shabat archives, there are several documents concerning Korczak Orphanage and ZSS. ZSS was Jewish Self Aid organization (pol. Zydowska Samopomoc Spoleczna [ZSS]; in German: Juedische Soziale Selbshilfe) was set up by the German authorities.

German Jews and Jews living there and in many other European countries felt directly the effects of the appointment of Adolf Hitler as German chancellor on January 30, 1933. Third Reich quickly became a regime in which citizens, especially Jews, had no guaranteed basic rights. The Nazi regime established the first concentration camps, imprisoning its political opponents, and others classified as dangerous. An extensive propaganda was used to spread the Nazi Party’s racist goals a.o. antisemitism and ideals. As part of an effort to align German arts and culture with Nazi ideas, university students in college towns across Germany burned thousands of books they considered to be “un-German,”  On May 10, 1933, Berlin university students burn upwards of 25,000 “un-German” books in Opera Square. and some 40,000 people gather to hear Joseph Goebbels deliver Nazi propaganda.

Therefore, the Exodus, returning to Eretz Israel increased in numbers. New routes for trains and ships were established. Jews were fleeing from Germany, Poland, and Russia.
There were pilgrims, tourists and fleeing Europe Jews that were passengers on ships crossing the Mediterranean and arriving in Haifa harbor but the number of Jews increased all the time. 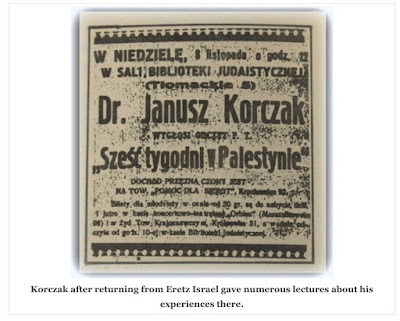 Korczaks two visits to Eretz Israel as a tourist gave him new strength. Korczak felt the historical meaning of Zionism and the momentous meaning of his own visit. He expresses the historical perspective of his trip with deep feelings and beautiful words:
No man, not one of my forefathers, I am the first. I have been privileged, I accomplished it. When seeing the far-off Haifa cost – the thought pulsed in me. The wish that is recited in the prayer every year "next year in Jerusalem" will come true. This is the end of exile. The return after years of wandering and persecution, I have privileged and have reached it.

The picture of Janusz Korczak and ship doctor Aleksander Ferber on SS Polonia in Haifa harbor should be further described. Although, the picture is not very clear one can easily see that both men as smiling in a way familiar with each other. Janusz Korczak new Frerbers parents that together with the Eliasbergs were actively supporting Dom Sierot financially.

JTA July 11, 1933
The S.S. Polonia, now on the trans-Atlantic run, will be put on a new route between Constanza, Roumania, and Haifa, Palestine, starting in September, Roman Kutylovski, head of the New York office of the Gdynia-American line told the Jewish Telegraphic Agency yesterday. The Polonia will be by far the biggest ship on this run and will add greatly to the comfort of persons going to Palestine either from Europe or America. A fortnightly service on the Polonia is planned by the Gdynia-American Line, according to Mr. Kutylovski.
At the present time most persons who go to Palestine from Europe or America start at Gdynia, near Danzig in the Polish Corridor, and proceed by rail to Constanza, whence they embark on one of the ships making irregular trips to the Near East.
According to the new arrangement, passengers buying through tickets will be allowed a long stay in Europe before going to Constanza to board the Polonia.
There will be a kosher kitchen aboard the Polonia, Mr. Kutylovski stated. The ship will fly the Polish flag. 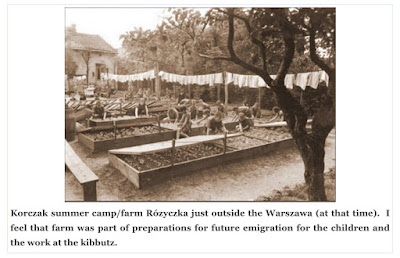 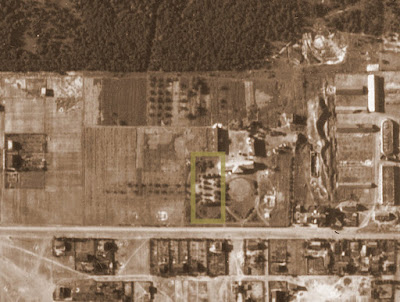 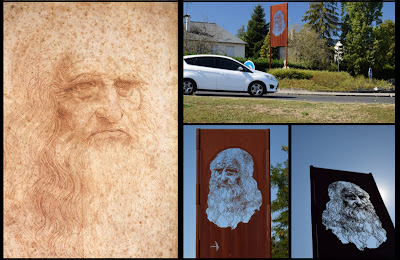 The artist (unknown at the moment) used the well-known drawing by Leonardo da Vinci (left). His face on the monument can be seen from the front and from the behind.

When in France, I saw this fantastic Leonardo da Vinci monument close to the city Amboise where he is buried. I was back with my thoughts to my planned Janusz Korczak monument as the digital metal cutting technique was the same as I was planning to use. The artist used the well-known drawing by Leonardo da Vinci (left). His face on the monument can be seen from the front and from the behind.

The link to the Janusz Korczak monument can be found here:
https://jimbaotoday.blogspot.com/2014/08/janusz-korczak-monument-so-it-started.html