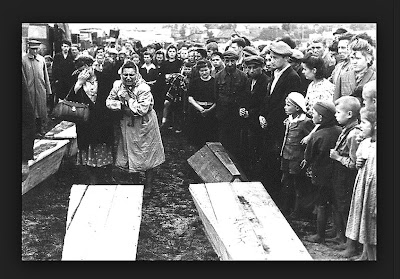 
First, I have to explain what is the Blood Libel?

The “blood libel” refers to a centuries-old false allegation that Jews murder Christians – especially Christian children – to use their blood for ritual purposes, such as an ingredient in the baking of Passover matzah (unleavened bread). It is also sometimes called the “ritual murder charge.” The blood libel dates back to the Middle Ages and has persisted despite Jewish denials and official repudiations by the Catholic Church and many secular authorities. Blood libels have frequently led to mob violence and pogroms, and have occasionally led to the decimation of entire Jewish communities.

The pogrom in Kielce took place on July 4, 1946. but some events which are very strongly connected with that pogrom started a few days before. Like in the Middle Ages a Christian child went missing, and local Jews were blamed.

The nine-year-old boy, Henryk (Henio) Błaszczyk, left home on July 1, without informing his parents. Henryk set out to visit family Bartosiński, friends of his parents in the village of Bielaki, almost 25 kilometers from Kielce. Henryk's visit took place during summer vacation, and it was not the boy's first visit there. During the war, his family had lived in the village for some time as well. In Kielce, Henryk's father, Walenty Błaszczyk, troubled by his son's absence, began searching for him. When searches and inquires brought no results, Henryk was reported missing to the police at midnight. On July 3, Henryk decided to return home, and that evening he came back to Kielce. However, on the next day morning, July 4, the boy's father set out for the police station with his son and one of the neighbors. On the way, they passed the house where Jewish families lived in Kielce, the so-called Jewish house.

According to the testimony given by the father and the neighbor, they asked the boy if he had been kept at the Jewish home. The boy afraid of his own escape to the village of Bielaki, stated that he had been held there, but he also pointed to one short man standing near the Jewish house and said that this man had put him in a cellar. Rumors that started from the time Henryk was missing changed to the pogrom!

Jewish soldiers from WW II and former prisoners of concentration camps were among the victims.

On July 4th, 1946 Izak "Antek" Cukierman took part in a meeting with Polish Prime Minister Edward Osobka-Morawski. At some point, the prime minister was called to the phone. When he returned, he announced the audience that pogrom took place in Kielce. "Antek" was the first that came to Kielce, Warsaw, bringing with him two trucks of medicines and other necessary measures.

Cukierman recalled:
I went out on the streets of Kielce, the city was like a ghost. I was taken to the morgue. I saw dozens of bodies. Still they brought new bodies of Jews murdered on the road. I've seen pregnant women with the ripped bellies. I can not describe what I saw. Yet it was not the year 1942. It was the year 1946!

On July 8, 1946, the victims of the pogrom were buried at the Jewish cemetery in Kielce. Several trials grew out of the Kielce pogrom. During the first such trial, nine people were sentenced to death. By September and October, other trials were being held in Kielce in which the accused were not only civilians, but also soldiers and policemen. 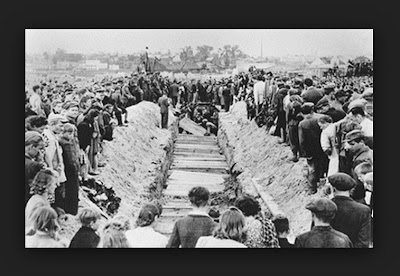 At the beginning of July 1946, an eight year-old boy Henryk (Henio) Błaszczyk was reported missing in Kielce by his father.  He was found after two days. The police ordered the father to bring the boy to the local police station. A crowd gathered outside and rumours started circulating that the boy had escaped from the cellar of a house in which he had been imprisoned by Jews who allegedly  kidnapped Jewish children and ritually murdered them. The crowd rushed to the local Jewish Commune on Planty Street, home to some 150 Jews who had survived the Holocaust. This is how the so-called Kielce Pogrom began.
Henryk Błaszczyk kept silent for 50 years. In 1996 he decided to give an account of what he still remembered of the events of 1946. In the autumn of 1945, after his father’s return from forced labour in Germany, the Błaszczyk family moved from a village to Kielce. They suffered great poverty, often going hungry. One day Henryk went to the village of Bielaki, where he stayed with the  Bartosińskis. At long last he had enough to eat and was happy there. He wanted to remain with the family for good but eventually he returned home after three or four days. His father was not angry with him, but the next morning he took him to the police station and ordered him to say that he had been kidnapped by Jews, had been kept in a cellar and had managed to sneak out of the window thanks to assistance offered by a Jewish boy.
When Henio and his father approached the police station, a throng of agitated people was already gathered outside. The boy was kept in detention until January 1947. Later on, he saw his father drinking vodka with secret police agents visiting their home. Both the father and mother told him to keep silent, warning him that ‘otherwise he would have his head chopped off’.  Small wonder that he kept silent for so many years. Henryk Błaszczyk’s story lacks clarity but the ambiguities will never be explained. He died shortly after being interviewed for the film.