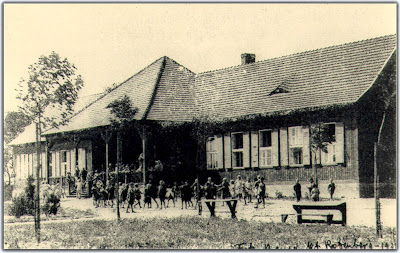 Summer camp Rózyczka at Goclawek for the children from the Korczak's orphanage. Here we know for sure who was the photographer - Benedykt Rotenberg later known as Jerzy Benedykt Dorys.
Jerzy Benedykt Rotenberg (Dorys) came to Warsaw in the 1920s in pursuit of his beloved Halina Pregierówna. He was still aiming at a career in music, having learned to play the violin for 9 years with Alfred Wiłkomirski. In Warszawa he worked in a silent film orchestra, but an unexpected hand injury changed his future.

As a professional, Rotenberg debuted in 1928 during the first International Salon of Art Photography in Warsaw, the same year he photographed Korczaks summer camp Rózyczka. 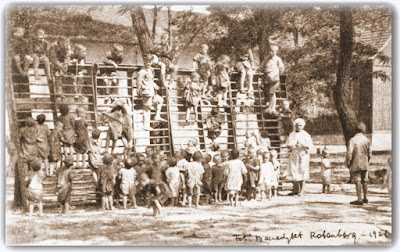 A year later, he opened his own studio “Foto Dorys" at 41 Aleje Jerozolimskie (at that time, he used already a pseudonym, although officially he didn’t change the name until the end of the war).

Two Miss Poland (see the photo below) were chosen thanks to Rotenbergs camera. At that time, Miss Poland was selected only from the portrait photos.

Rotenberg/Dorys ran his studio, located on 41 Aleje Jerozolimskie (corner 39 Poznanska str - the building survived WWII), until 1939. He was then forced to sell it and along with thousands of other people, like Korczak, he had to move to the ghetto. There, he continued his photography business at 16 Chlodna street. He also had Germans coming to his small studio. They would often ask him to develop negatives: many were shots of the ghetto. Dorys made copies and passed them on to underground organizations.