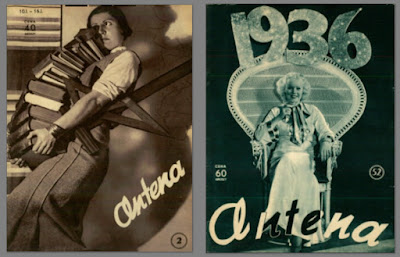 Earlier, I wrote here, on my blog about my "uncle Bronek", professor Bronisław Baczko that asked me just before he died (2016) to look for the articles he wrote as a child in Korczak`s Mały Przeglad - The Little Review.
His articles were signed Bronek from Gesia street. However, I found, just a note about his first article. Now. I found however, numerous Zygmunt Bauman writings and now I am actively looking for "Beniamin from Cegielna (street)" - Beniamin from Cegielna is Włodzimierz Brus, the third famous professor from the University of Warsaw that left Poland after antisemitic wave that started in the mid-sixties called in Polish Marzec 1968.

Professor Zygmunt Bauman, one of the most renowned and prolific figures within the field of sociology died this year in January at the age of 91.

Bauman was as well, as a child both reading and writing in Korczaks newspaper. Here, see below, is one of his articles/letters entitled Kubeł zimnej wody dla Dyci z Zamościa. It was published in the section Free Tribune (Wolna Trybuna). He is rather upset that Dycia wrote the story about Korczak knowing that he is the editor of The Little Review. 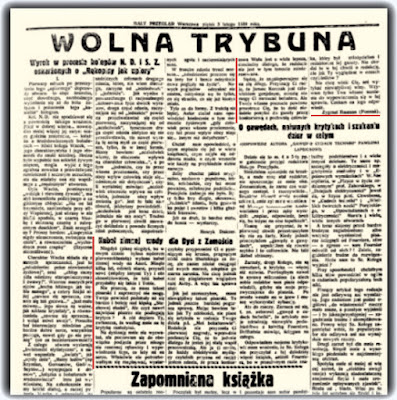 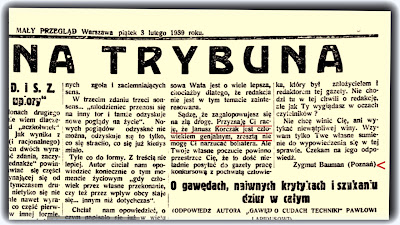 In the part of The Little Review called FREE TRIBUNE Zygmunt Bauman wrote:

A BUCKET OF COLD WATER FOR DYCIA FROM ZAMOŚĆ
.....I do not want to plagiarize the words of Rabbi Akiba. So I will say as follows: As I already noted, you are undoubtedly a talented writer; however, this only makes the matter worse. With abilities such as yours, you simply should not have written an article such as your “My heroes.” The editors did not award you the first prize – even though they offered you some consolation due to the fact that you are a regular contributor. Yet, I think – as well as probably every other reader who thinks objectively about the matter – that the contest submission by Wat was much better, even due to the simple fact that the editors were not involved in this subject. I think you go too far. I admit and I agree with you that Janusz Korczak is a truly outstanding man and I am not the one to tell you who should be your personal hero. However, your own conscience should prevent you from sending praise of a man who created and served as editor-in-chief of a paper to the same paper as a contest submission! It’s not only about the editors, but what does that make you look like in the eyes of other readers? I don’t want to blame you or point my fingers at your obvious fault. I only call upon your conscience to address the issue and I am looking forward to reading its answer.
Zygmunt Bauman (Poznań)

Zygmunt Bauman uses the title A BUCKET OF COLD WATER from The Little Review from 1933. It was a special article about The Little Review editorial staff. The article is the criticism of numerous, named, co-workers (see below). 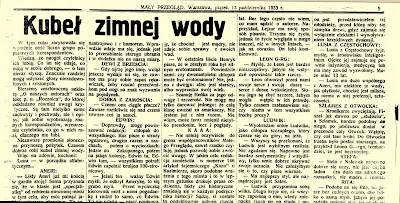 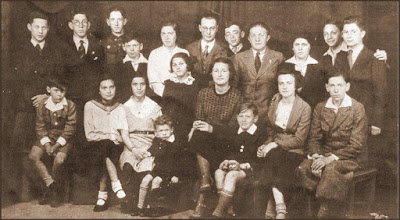 DYCIA FROM ZAMOŚĆ was Dycia Goldgraber, a writer for the youth and children's newspaper "Maly Przeglad." In the photo: Goldgraber is on the left. Photographed in 1935. Dycia Goldgraber was a regular reporter and a member of the editorial board (as a youth representative) between the years 1935 - 1939. She perished in the Holocaust.

Aneri. Zygmunt Bauman is mentioning Aneri in the beginning of this article. Aneri - Irena. Librader, later Smigielska. She was among the editors during first ten years of Maly Przeglad. She survived the Holocaust.

Link below:
More about Dycia and her sister Dora Goldgrabber and the editorial board of The Little Review 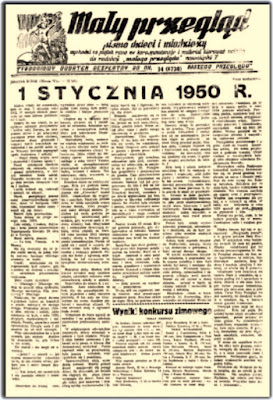 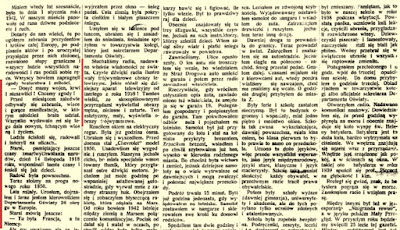 
His story is partly about... The European Union.
.
Jonatan wrote:
Right now, we are entering the
new year – 1950. Years have passed.
I grew up and matured, now I work
as the director of the Department
of Education of the 26th District of
Europe.
Older people still use to say things
like “Here’s where Germany used
to be, and that was France,” but we
consider ourselves to be a single great
nation, one big family and every human
being is our brother.

Jonatan wrote as well about television:
How different the television set was, compared to 1938!
They used to be giant and complicated devices, yet displayed murky,
distorted images. Nowadays they are aesthetic and small and yet they
can display everything in three dimensions!
I took a look at an electronic watch...


About the school system Jonatan Burak decided:
The school of education, formerly known as elementary school had eight grades, with first grade being somehow similar to a kindergarten. Children were taught languages – especially Esperanto, as the international language – old and classical languages, as well as their mother tongue. Every citizen had to graduate from such a school under the pain of forfeiting their citizen rights-
Then there are high schools (previously known as middle schools), as well as universities and academies for the most talented and intelligent students. Attending school was free and all the books, notebooks, bags and so on were supplied as necessary by the district authorities. Additionally, schools offered free breakfasts, recreation rooms and cinemas, open in the evening. The curriculum was accessible to everyone and the teachers were good, just and really loving their job. They all tried to take a look into the child’s soul, into every darkest corner and light it up with love and science.

I wonder what happened to Jonatan Burak.
The same fate as other correspondents to The Little Review? Murdered during the Holocaust!
Posted by Jim bao Today at 11:34 PM 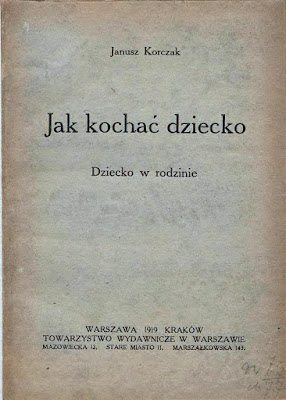 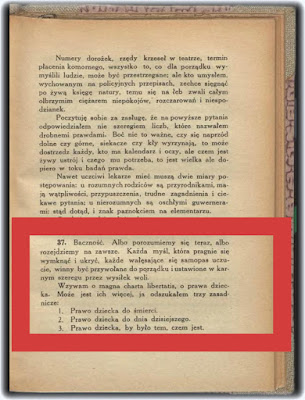 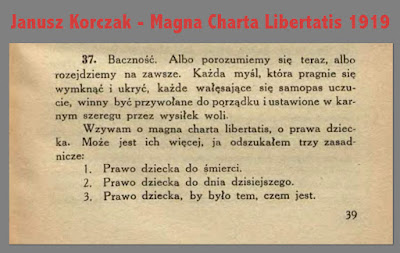 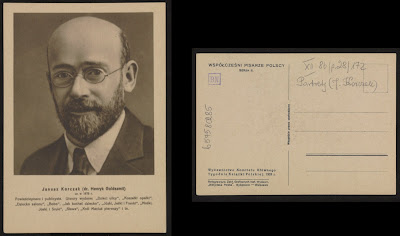 Will we find out how Korczak’s voice sound like? Where are Polish Radio recordings with the voice of the Old Doctor ?

Description of the Janusz Korczaks voice:

He gave radio talks, during which children and grownups alike listened with bated breath to the voice of the Old Doctor. His rather low, warm tone, and the fact that he often paused as if seeking the precise word in just the way one does when talking to oneself or a confidant, created a sense of intimacy, of co-feeling. 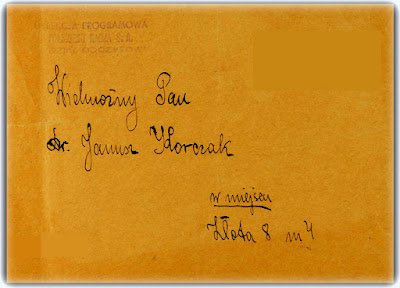 An envelope addressed to Dr. Janusz Korczak, No. 8 Zlota St. Apt. #4, from the Lectures Department of the Polish Radio Programming Administration.

Janusz Korczak’s engagement with the Polish Radio is another special area of activity which adds to his literary work. Between 1934-36, he had his own radio talk-show, as part of which he created the figure of the Old Doctor (Stary Doktor). A fully-developed radio character, the Old Doctor was admired by children and entire families of all faiths. The Old Doctor created a warm atmosphere, full of trust towards children. After an unexplained break in the broadcasts, which might have had something to do with growingly anti-Semitic tendencies in Poland, Korczak returned to the radio first in 1938 with a new series of broadcasts for older children and adults.


His last show took place in September 1939, during WWII, when he addressed children in an attempt to soothe them and prepare them for what was coming, the war.

Unfortunately, it is likely that no recordings of his broadcasts have survived WWII. Some of the recordings were found after WWII but not with programs of Janusz Korczak. So, we will probably never find out what his voice sounded like. However, we can read the content of his presentations; as the transcriptions were included in the issues of the Polish Radio Newspaper and also edited as a book in 1939. 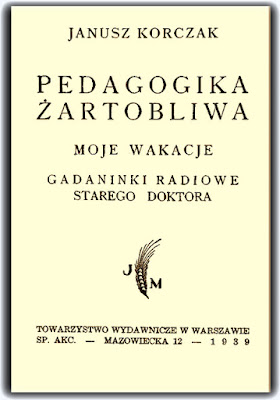 On 14th June, 1911 the cornerstone for the Dom Sierot, the Orphans’ Home building was laid on 92 Krochmalna Street. The orphanage opened on 7th October, 1912

In November, 1940, one year after the creation of the Warszawa Ghetto, Korczak and the orphans were forced to leave 92 Krochmalna (which now found itself outside of the ghetto) and to move into a building of the State Trade School on 33 Chłodna Street.

In October 1941, due to the diminishing of the Ghetto area, the Orphans’ Home moved again. This time the Home relocated to a building on 16 Sienna/9 Śliska Street.
Posted by Jim bao Today at 5:22 AM