Janusz Korczak was born Henryk Goldszmit to a Jewish family in Warsaw, in 1878 or 1879. - This year is 140th anniversary of Korczak's birth.

Janusz Korczak was born Henryk Goldszmit to a Jewish family in Warsaw, in 1878 or 1879.

His father failed to register his birth and registered him first in 1881, hence the uncertainty. At that time numerous peoples registered their children several months, sometimes even years later and often the children knew about it as they were celebrating the birthdays, not on the day they had stated in their birth certificate.

Korczak wrote about it on July 21, 1942:
Tomorrow I am finishing sixty-three or sixty-four years. My father did not arrange with my birth certificate for a few years (Jutro kończę sześćdziesiąt trzy albo sześćdziesiąt cztery lat(a). Ojciec przez parę lat nie wyrabiał mi metryki..).

The very first known document (photo above) is from the Jewish Community in Warsaw written in Russian. This document was from the time when Korczak parents moved from 18 Bielańska street where he was probably born to 77 Krakowskie Przedmieście.

I the dedication of his book King Matt the First for Stefa Wilczynska, Korczak wrote in the third line"...he lost his birth certificate in the country of Bum-Drum" (October 25th, 1922).

The month of May is cold this year, And tonight is the quietest of all nights wrote Korczak in 1942 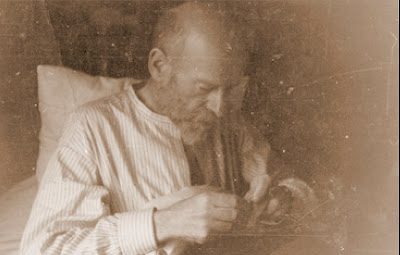 A few weeks after Bloody Friday*, Janusz Korczak sat up in bed and turned to the diary.
He wrote:
The month of May is cold this year, And tonight is the quietest of all nights. it is five in the morning. The little ones are asleep. There are actually two hundred of them. In the east wing-Madame Stefa, and I in the west-in the so-called 'isolation ward.' "

Later he wrote:
It is half past six.
In the dormitory someone shouts:
"Boys, time for a bath" get up!" I put away my pen. Should I get up or not? It is a long time since I have had a bath. Yesterday I killed a louse I found on myself without batting an eye-with one dexterous squeeze of the nail-a louse.
If I have time, I shall write a eulogy to a louse. For our attitude toward this fine insect is unjust and unfitting.
An embittered Russian peasant once declared: " A louse is not like a man, it will not suck up every last drop of blood."

* Bloody Friday - April 18th, 1942, an execution of printers and distributors of Ghetto undercover press. Emanuel Ringelblum blames Kohn and Heller that were coworking with Germans.
Posted by Jim bao Today at 7:06 AM