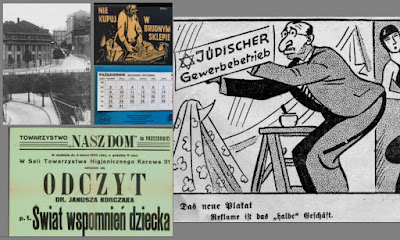 Polish Society of Hygiene is located in Warszawa at 31 Karowa street. Very well known address for Korczak and for me as well.
.
Janusz Korczak (Henryk Goldszmit) had numerous of his scientific presentations there during 30-ties (green poster) and I was watching children movies there in the mid fifties.
.
This year Polish Society of Hygiene edited the blue calendar with black/orange anti-Semitic Polish drawing that supports racial hygiene. This type of drawings were seen as well in the German newspaper Der Stürmer (right picture). However, it was during the period of 30-ties and not 2017. So why?


Racial hygiene was a set of state-sanctioned policies in the early twentieth century by which certain groups of individuals were allowed to procreate and others not, with the expressed purpose of promoting characteristics deemed desirable. The most extensive implementation of such policies occurred in Germany but similar policies were implemented throughout Europe, a.o. Poland (and Sweden).

Many prominent physicians and scientists who had supported racial hygiene ideas considered Jews, like Korczak, as alien.
Posted by Jim bao Today at 7:34 AM