I was wrong concerning Janusz Korczak feelings about Israel 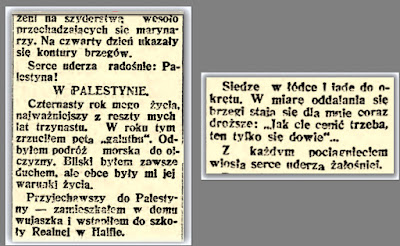 I was not thinking about Korczak as Zionist. I thought his feelings were developed first in the mid nineteen-thirties when his fight against antisemitism in Poland failed.

His thoughts and feelings about his Jewishness and his family's traditional views were/are often wrongly interpreted. However, Korczak was a typical secular Jew concerning his living and traditions. That means keeping the traditions but in a new secular way.

Korczaks two visits to Eretz Israel gave him new strength. Korczak felt the historical meaning of Zionism and the momentous meaning of his own visit. He expresses the historical perspective of his trip with deep feelings and beautiful words when approaching the Land of Israel: No man, not one of my forefathers, I am the first. I have privileged, I accomplished it.

When reading The Little Review, very first issues from 1926 and 1927 one can see that there were very strong bonds between Korczak and the Zionist movement.

Already in the first issue of The Little Review dated April 1st. 1927, Korczak introduces the alrge letter/article from Asher from Wolska street and his trip to Palestine.

The contours of the banks appeared on the fourth day. The heart strikes happily: Palestine!
IN PALESTINE.
The fourteenth year of my life, the most important of the rest of my thirteen years. In this year, I dropped the tether of "galuthu", I made a sea voyage to my homeland. I was always close but I was unfamiliar with her living conditions...
.....

I'm sitting in a boat, I'm going (back) to the ship. As we move away, the banks become more and more dear for me:
"...my fatherland! You are like health;
How much you must be valued, will only discover the one who has lost you" *
... With each stroke of the paddle, the heart strikes more pitifully.

*It is taken from an epic poem by the Polish poet, writer and philosopher Adam Mickiewicz. 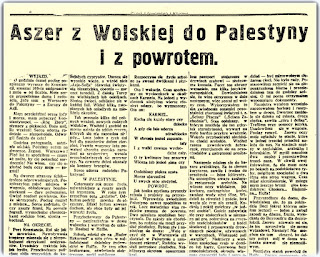