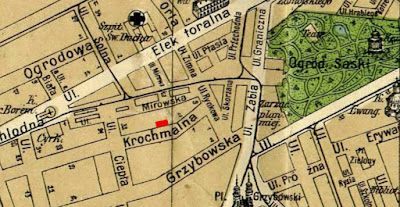 The  Singer (Zinger, Zynger) family moved to the house at Krochmalna Street (initially No. 10, and later No. 12) in Warsaw. It was around 1907–1908. Isaac B. Singer was 6-7 years at that time.Isaacs father, Pinchas Zinger worked as a rabbi in the area. There was a shul at Krochmalna No. 12 but it is not known if he worked there.

He immigrated to the United States and was never back to Warsaw - but he used to say had said that wherever he's going to, he always feels like walking on Krochmalna Street. He was doing it in his mind, his book and on the map of the prewar Warsaw.
In Singer's day, Krochmalna Street was always in the grip of a kind of fever, teeming with life. Artisans, water carriers, furriers, tailors, fruit peddlers, fences, maids, ... Isaac Singer said, "As far as I'm concerned, this was the center of the universe".

Krochmalna street changed a lot after Isaac B. Singer left Poland for the USA.

Newly found photos (taken by German photographers during the Holocaust, shows the two buildings where Singer lived when in Poland. 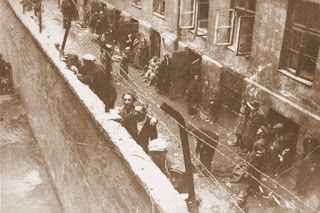 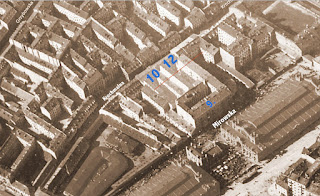 Warsaw Ghetto. The ghetto wall between 9 Mirowska str. and backyard of Singers house at 12 Krochmalna street. On the bird view picture, the wall is marked with a red line ----. 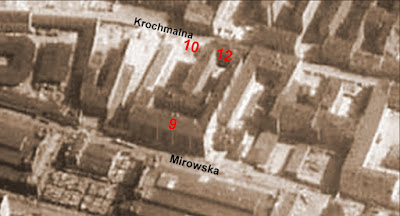 Mirowska and Krochmalna street - bird view. Krochmalna No. 10 building seems to be destroyed and ruins taken away. 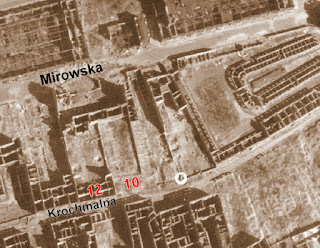 Mirowska and Krochmalna street - bird view. Krochmalna No. 12 building is destroyed and No. 10 buildings ruin are taken away.  1945. 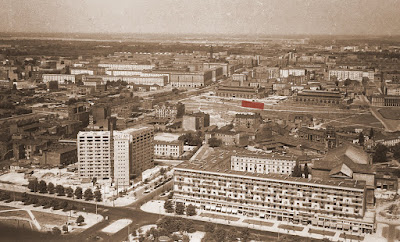 After WWII view (after 1958).  From Sliska str in the bottom of the photo to the Krochmalna street. The red marked area shows where the buildings Krochmalna No. 10-12 were before WWII.